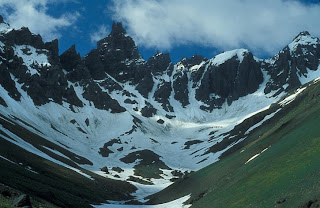 The little engine that could...did!

If you're not familiar with the story of the "Little Engine that Could", it's a cute little children's story about an train engine that was trying to climb a mountain. As the mountain began to peak, the little engine began to lose strength, stamina, and energy, thus causing him to lose his confidence in his ability to make the uphill journey.

Depending on the version of the written story, the little engine basically tells himself he can't make the mountain. Negative thoughts begin to flood his mind and he begins to believe the lies that he isn't capable of  finishing hit journey.

The next time you encounter a mountain in the path before you,
and are tempted to say, "This is JUST TOO BIG!!!"...

I pray that you would remind your mountain
just HOW BIG YOUR JESUS IS!!!

Jesus replied, "I tell you the truth, if you have faith and do not doubt...you can also say to this mountain, 'Go throw yourself into the sea,' and it will be done." Matthew 21:21

...then you remind yourself that...

The "Little Engine that Could" finally DID climb that mountain!
He didn't give up! He spoke up and talked to himself!
He spoke to the doubts and said...

He kept going forward! (Despite wanting to quit!)

and
so
will
you
IF
you
DO
NOT
QUIT!!!
at January 09, 2012 2 comments:
Email ThisBlogThis!Share to TwitterShare to FacebookShare to Pinterest
Labels: Faith, Focus, strength

The walls you're rebuilding are never out of my sight."
(The Message)

Have you ever gotten a tattoo?
If not, I'm sure you know someone who has.


I know many people, including myself, who have gotten tattoos to symbolize their love for another person. I guess in a way, you could call it a "love wound". We choose to sit through the irritation/pain of a tattoo so that we have a "memorial" of a memory or a person. Years ago, I made a very spontaneous decision to get initials engraved on my body. I SOOOOOOO regret it now, as that person no longer holds that special place in my heart.

The verses above in Isaiah speak of God's love for His people in Israel. He wanted them to know that He wouldn't forget them because they were engraved into the palms of His hands. The verse before speaks of a nursing mother who forgets who baby at her breast, yet God will NEVER forget.

In the New Testament, Jesus bore "love wounds" for us.


Every breath of air He gasped for was for you and I.

Lately, I've been worrying and having anxiety over my kids, but God brought me back to this verse. If He loves me enough to let His only Son bear "love wounds" for me, wouldn't that mean He loves me AND my children enough to take care of us. Isn't God still big enough in our lives to take care of the small and big circumstances around us???

I've always told Dylan that he can't trust and be afraid at the same time. He has to choose to trust that God will keep him totally safe when he falls asleep, or else He chooses the believe the enemy's lies and is afraid. Trust and fear are opposites. He gets that and now is calling me to make the same choices.

Today, I choose to relinquish control of my children and place them back into the arms of my Heavenly Father who holds and can protect them better than I ever can. I choose to trust that God is still in control and still has a plan greater than I can ever imagine. I choose to believe that I will walk in the wisdom and counsel of God because I have the mind of Christ. I choose to stand with the sword of the Spirit in my hand, and quit cowering with fear and doubt. I choose to declare God's promises over myself, my children, my finances, my job, my house, our futures and God-given destinies. I choose to remember the "love wounds" my Savior bore for me, and to keep looking forward and up! In the name of Jesus Christ, I stand!


~engraved in His palms~
at January 07, 2012 No comments:
Email ThisBlogThis!Share to TwitterShare to FacebookShare to Pinterest
Labels: Faith, Trust

I spent the last week of 2011 determined to bring in the new year by letting the past be the past...once and for all. I have spent so much of my life re-living scenario after scenario of my past. Whether it be things from my childhood, or my teen years, or my mistakes, or from my marriage/divorce, I just continued to live in it.

Everything God had shown me up until December 31, 2011, was leading me in the direction that my past had to go!  I was like a war veteran, telling the stories of the past over and over, only to keep myself stuck in that time frame of hurt, rejection, and pain.

Anyway, I woke up January 1, 2012, determined to go forward into all that God was calling me to. By mid-morning, I was ticked, irritated, and saying some very bad words!!!  Although my past was not repeating itself, it felt like it was through a very similar situation. I was ready to run someone over TICKED BEYOND TICKED!!!

The memories of my past reared its ugly head and started taunting me.

"Ha! Ha! Here I am! You thought you could get rid of me! Remember this incident? And this one? Remember the pain of this one? The rage? The bitterness? The anger? The injustice? Oh, what about this? Just in case you forgot, let me remind you about..."

I was ready to blow!!!!! I had a "right" to be was angry! That person had NO right! Selfish! Jerk! Bad, bad, bad words! Insensitive! Grrr.... I continued on and on until I eventually lost all of my peace, all of my joy, and probably a little sanity as well.  I let the offenses come and stack up so high that I couldn't even begin to think of sleep because my mind was so bombarded with junk!

I finally found sleep because I eventually woke up....(angry!)

I did that for two or three days.

I finally cried out to God, "I'm tired of being angry and bitter. Please help me not hunt this person down! Make good come out of this. I pray for everyone involved, even the person making the poor choices. Jesus, we need you to make this right! I need to move forward. Help me to be a light, not a jerk. Protect my kids! Protect the hearts of everyone else involved. And please move in this situation! In Jesus' name, Amen."

I was able to sleep last night.

I woke up with peace this morning.

When the next ghost from the past appears, I will choose, once again, to go forward...

Because I am CHOOSING to...

"forget what is behind and strain towards what is ahead... (I will) press on toward the goal to win the prize for which God has called me heavenward in Christ Jesus." Philippians 3:13b-14

Who am I Lord?

Heaven
I'm just a simple girl trying to live simply in the arms of Papa God...moment by moment!

Blogs I love to read